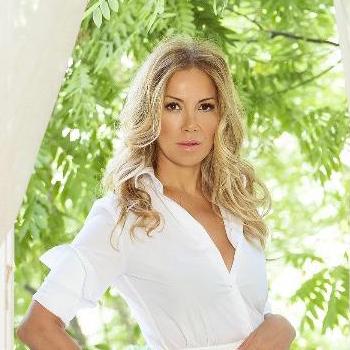 Frini Tsakonas was born in Piraeus Greece. She Studied French literature at the Kapodistrian University of Athens and then did postgraduate studies at PARIS IV, University of Sorbonn.

In 1995 she studied journalism at the Antenna Media Lab, while she started a collaboration with the SKAI TV station presenting a filler in the station’s main news. At the same time she also presented the “Motor in Action” weekly broadcast, on SKAI TV as well. In 1999 she presented the morning informative magazino “FROM A to Z” with the journalist Mr. Thanasis Athanasiadis on the Alpha TV station.

In 2002 she presents and holds the position of the chief editor at the daily informative broadcast “DAYTIME IMAGES“ on TEMPO. One year later, in 2003, she presents the daily informative magazino “Morning Pages” with the journalist Mr. George Economeas on Alpha TV station. In 2005, Frini moved to the entertainment sector and presented the daily Women’s broadcast ‘’ΝESSAIRE’’ and was also the chief editor of this show on Channel 9.

Later on, in 2008 she starts working with the Antenna TV in the entertainment sector, presenting the weekly show “’Antehete’’. At the same time, she undertakes the communication and advertising of the apparel company ISO S.A.

From 2011 until 2014 she holds responsible for the commercial department of the female site T-LIFE where she has the journalistic diligence of advertorials. At the same time, in 2014, she also works as a radio producer at ALPHA Radio. In 2015 she works as a radio producer at LOVE RADIO, presenting the morning weekend program while she is also the hostess and editor of the daily 2-hour program “WOMEN’s AFFAIR” on BLUE SKY TV station.

From 2016 until today, Frini runs her own company of  luxury garments, TUNICA STOLA, aiming to promote the Greek garment abroad.